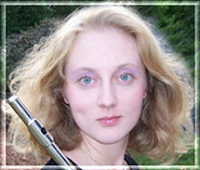 Aubrie Dionne is an author and flutist in New England. After reaching a high point in her flutist career Aubrie decided to pursue other creative passions.


“I’d always loved writing and reading fantasy/sci fi books ever since I was little but I always pushed it aside for flute. I felt like I needed to explore more of my interests in life. Ever since I started writing, I couldn’t stop! I use what I’ve learned about craft, diligence, structure, from my flute playing. It’s exciting to start a new discipline and have no idea where my boundaries are: how far I can go with it, how good I can get.”
Paradise 21, Aubrie’s fourth book, was released August 2 as one of Entangled Publishing’s ten launch titles. 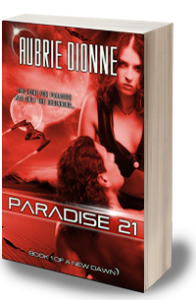 Aries awoke to flashing lights and smoke. A wailing siren sounded in her ear, each surge aching in her head. Coughing, she pushed a panel to bring up the screen, but the panels remained blank. Trying to control a jolt of panic, she unbuckled the belt across her stomach and heaved herself up, feeling like a supply container was sitting on her chest. She gasped in dismay as she ran her fingers across a jagged crack slicing the main control board in two pieces. The impact had destroyed the mainframe processor, ruining the escape pod.

She’d known the landing would destroy the pod, but that didn’t quell a feeling of vulnerability from washing through her. Aries had stranded herself in a foreign land with no way home. The thought of her parents and the ceremony she’d missed in order to escape flickered briefly in her mind. If her friends and family ever found out what she did, she hoped they would forgive her. To live her life for them would make her miserable; she had to invent her own destiny.

Laughter rumbled up from her gut, light at first, then deepening into triumph. She was free. Halfway stuck in a dune on Sahara 354 was exactly where she wanted to be.

A new light blinked beside her, distracting her from the condition of the pod. Aries brought up her arm to check out the locator. A light on the wide cuff flashed bright green, and she wished she could rip it off. Someone in the New Dawn had found a way to reactivate it.


In Paradise 21, Aries Ryder is fed up with the status quo aboard her colony ship, The New Dawn, and wants to take destiny into her own hands. She’s an intelligent, driven, and compassionate main character inspired by all of the sci fi women in the movies I watched as a teen.
Here’s my favorite sci fi main characters and what I liked about each one:
Sigourney Weaver as Ripley from the Alien movies-
I love how tough Ripley is in the face of danger. She shows emotions, but she works her way through it. We see a softer side of her in Aliens, when she saves Nute, the little girl from the colony. She takes her job very seriously, and suffers ridicule for her crazy alien stories that turn out to be true. She sacrifices her own safety to go back after the aliens and save others. Truly heroic.
What I love most about her is that she doesn’t have a traditional romantic lead in any of the movies. She doesn’t need one. She is defined by her actions and not by who she falls in love with. Awesome.
Beverly Crusher from The Next Generation:
Beverly Crusher is the chief medical officer aboard the USS Enterprise. What I liked the most about her was her duel role as chief examiner and mom. (Remember Wesley Crusher?) She always treated everyone with compassion, and her quiet romance with Jean Luc Picard always kept me watching to see if they’d end up together in the end. She’s sensitive and highly perceptive, and seems to pick up on things that the rest of the crew overlook in others. She has a great sense of justice, and will defend the underdog fiercely. I liked how she was strong, yet feminine.
Princess Leia from Star Wars:
I loved how driven Princess Leia was. She wouldn’t let anything get in the way of her work with the rebellion. Her personality was forceful and blunt, and she fought against her attraction to Hans Solo, making for a great movie material! She kills Jabba the Hut in Episode VI, regaining her freedom wearing a metal bikini. She’s tough as steel, determined, and bold. A great sci fi role model.

My question: Can you name a strong female character in sci fi? Who’s your favorite?