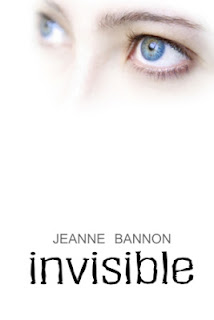 For a short time, Invisible will be available for 99 cents

Lola’s not pretty. Lola’s not popular. Lola wishes she could disappear …
and then one day she does just that...

For seventeen-year-old Lola Savullo, life is a struggle. Born to funky parents who are more in than
she could ever be, Lola’s dream of becoming a writer makes her an outsider even
in her own home. Bullied and despised, Lola still has the support of her best
pal Charlie and Grandma Rose.


Not only is she freakishly tall,  Lola’s a big girl and when forced to wear a bathing suit at her summer job as a  camp counselor, Lola’s only escape from deep embarrassment seems to be to
literally vanish. Soon after, she discovers the roots of her new  “ability”.


Slowly, with Charlie’s help, Lola learns to control the new super power. The possibilities are endless. Yet power can be abused, too…


Then, when tragedy strikes, Lola must summon her inner  strength, both at home and at school. She has to stand up for herself, despite the temptations and possibilities of her newfound super power.


A coming-of-age story that will warm the heart.

“Lola, get your suit on and help supervise the pool,” Justine, the athletic, sun-kissed, twenty-one-year-old camp director orders once we get off the bus.“The more eyes the better.”


Immediately my heart takes off in a sprint. “What? Why?” I try to hide the wobble in my voice.


Curious, expectant gazes turn to me as my fellow counsellors wait with evil half-smiles for my reaction. Although I haven’t told a soul, except my best friend Charlie, how I feel about wearing a bathing suit, they know my private horror. It’s the horror of every fat girl.


Justine flips through the sheets on her clipboard. She runs a finger down the column of names. “No campers will be sitting out today.”


The impossible has just happened. Not one kid was sick, or had left their bathing suit at home. In my three summers as a counsellor, not once has this happened.


For a long, awkward moment, I stand frozen in place wondering how to get out of this. A sudden migraine? My period? My mouth opens, but no words come.


Justine leaves and with her, my chance for escape. I’m left teary-eyed, searching through my bag for my black one piece.

Stuffing away the panic, I march past the onlookers, who I have never considered my friends despite working with them the entire summer. In the change room, I find an empty stall and with great reluctance, pull on my suit.


It’s my last day of work as a camp counsellor at Inglewood Day Camp. My group of kids consists of eight six-year olds — four boys and four girls. On Thursdays we take the campers to the local outdoor swimming pool. It’s a short ride, only five minutes on the creaky old school bus and my job is to watch the kids who won’t be swimming; either because they don’t feel well, or they’ve forgotten their swimsuits. Believe me, this job suits me just fine. As a matter of fact, I volunteered for it.


Not only am I fat, I’m freakishly tall. God only knows why, since Mom is petite and Dad is on the short side. My older sister Eva is the spitting image of Mom, fair and fine boned. I take after Dad’s side, bulky, dark and thick. Dad says I must have gotten some of Uncle Sammy’s genes, the giant of the Savullo family, who tops out at 6ft 4 inches. Anyway, I’m sure you’re getting a good mental picture right about now.


My insides drop as if I placed a foot on a step that wasn’t there when I peer down at the coarse dark hair creeping from my calves to just past my knees, where it gradually peters out. Then I run a hand across the tops of my thighs. The triple bulge of my belly prevents me from a good look at my sorely neglected bikini area. Even in the blazing August sun, I wear baggy cotton Capri pants, never exposing more than an ankle. There’s never been a reason to shave. My eyes mist with tears, but I pinch them away. It’ll be hard enough to go out in public like this, but I won’t give them the satisfaction of seeing me cry. I lift my chin in resolve and open the door.


The whistle blows, signalling the beginning of the session. Screams of delight fill the air, as the kids jump into the pool to find relief from the 90-degree heat.


I fasten a towel around my waist as best I can. Towels never seem large enough to wrap completely and comfortably around the bulge of my stomach. To the pool I go, treading silently so as not to draw attention.


At first I think she’s joking because I’m right in front of her. I toss her an annoyed look and don’t bother to answer as I trudge past to the edge of the pool, where I pull off my towel and slip into the water.


“She’s probably taken off,” Jerod replies.
He’s a year younger than I am, but looks older with his muscular build and chiselled jaw line. The girls love him. “I hope she doesn’t show,” he continues. “Who wants to see a hippo in a bathing suit anyway?”


Sonia laughs, a little too hard and places a hand on Jerod’s shoulder.


Puzzlement and anger compete on my face. I’m standing no more than three feet away from them. I’m used to rude comments and I know what everyone thinks of me, but this is way beyond mean. The tears in my eyes spill down my cheeks and I slip under the water, hoping to wash away the evidence of my pain. Not that anyone would care, but crying could give them more ammunition; just another reason to taunt me.


Kids bounce around me, laughing and playing. Justine stands like a sentinel, looking like a Bay Watch babe in her red suit, one hand gripping an emergency flotation device. Her steel blue eyes are focused on the activity in the pool.


Jerod jumps in, nearly landing on my back. I barely have time to leap out of the way. My anger boils; blood rushes to my temples and pounds there, giving me an instant headache. I hurl myself at him, pushing with all my might, elbows aimed at his chest. I hit nothing but air and fly into the rough concrete wall of the pool, scraping a hole in my one piece and rubbing raw a patch of skin. Small blood pinpricks rise to the surface.


“Hey!” I scream, bewildered. How’d he manoeuver out of the way so fast?
Jerod slips under the water and emerges at the other end of the pool in one long, slick glide.


The steel in me comes up, anger replacing humiliation. I pull my bulk out of the water and march over to Justine.


“Did you see what that asshole just did?” I bellow.
Justine brings the whistle that hangs from her neck to her lips and blows two sharp blasts, making my ears ring. “Stop horsing around,” she calls to a group of boys, who offer sheepish grins and stop instantly.


I step forward so she can see me. “Justine?” I reach to touch her shoulder but, impossibly, my hand falls through her.


“Justine?”I call again, louder, my voice panic-laced. With both hands, I grab her, or tryto. Again, it’s as if she’s not there.


My mind is swept along in a current of anxiety. What’s happening?


Then it hits me... it’s me who’s not there.
Purchase your copy at:
http://www.amazon.com/Invisible-ebook/dp/B005LW21CC/ref=tmm_kin_title_0?ie=UTF8&qid=1346767635&sr=8-1
99 Cents chapter one excerpt ebook sale Invisible Jeanne Bannon Solstice Publishing