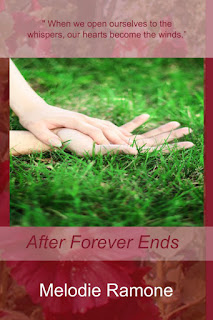 Orphaned by her mother and brushed off by her dad, fifteen year old Silvia Cotton has lived a lonely life. That is until her father moves the family from the Highlands of Scotland to the Midlands of Wales. It is there she is enrolled in Bennington, a private boarding school, and meets the charming and rebellious Dickinson twins, Oliver and Alexander. Her regrettable life is changed forever.
Locked into a fierce friendship with Alexander and lost to a whirwind romance with Oliver, Silvia finds herself torn away from everything she thought she knew. Married too soon, she moves with Oliver to a rustic cabin deep in a Welsh wood and embarks upon a life she'd never planned for, surviving on hope she never knew existed and faith she never knew she had. Through the years of laughter, joy, sorrow and tears, she makes her way through university and onto a career, only to surrender her ambition to raising her children and living a life that was strikingly "normal." But what is normal? Certainly not what ensues in the wood.
True love, faeries, friendship, loves lost and gained. Fate, doubt, friendship, strength and courage, Silvia's story could belong to anyone, but it is her own. Simple yet extraordinary, told with wit and candor, Silvia unravels the tangled web of her days as she reveals the secrets that exist in an ancient wood, how hearts given freely can become the stuff of magic, and how true happiness is never any further than one's own back garden.

Welcome, Melodie. Your story sounds wonderful. Could you tell us what inspired you to write After Forever Ends?

The title actually comes from a line in the book itself. Oliver says to Silvia, “I love you. I have always loved you. I loved you before I knew you were real and I’ll love you more still after forever ends.” There is an on-going theme in the story coming from Oliver concerning “forever”. He uses the word a lot, but it’s really only he who understands the deeper implications of it…until the very end of the story when Silvia finally works out
what “forever” actually means.

Lately, it’s erratic. I’ve had sick kids and lots of doctor appointments, but when I get down to writing and I find my groove, I literally write from about seven in the morning until midnight or later. I’m lucky because I have children who are becoming an independent age and one of them wants to be a chef, so she’s happy to cook. She’ll plop a plate beside me and kiss my cheek. Now, keeping the house clean is a different story! Everything falls apart and lays on the floor when I go to work. Haha. But it’s all good.

Where do you hope to be in 5 years?

Hmm. Where do I hope to be? Back in Wales, living in a cottage, nestled deep in a wood. Where do I think I’ll be? Right here in the USA, living happily in my yellow house in the middle of a college town.

Tell us a little about your road to publication. Was it a long one?

I was actually published the first time at the age of twelve and have been published several times since. Never a novel, though. After Forever Ends is a deeply personal work for me. The main characters are based on people I have known. Some of them passed too soon and I wanted to give them the lives they didn’t have.


Some of them are still walking around and know I put them in a book. Some of the events and all of the places are real. You could literally visit them. And some of the conversations that occur actually happened, almost word for word. So, in the end, it was a conscious and purposeful decision NOT to go the traditional publishing
route with After Forever Ends. I self-published it exactly how I wanted it, without anybody telling me what to change and how to change it. So was it a long road? Yes and no. It was a series of choices, decisions based on passion and an absolute labor of love.

Are your books available as eBooks? If so what was your experience of that process?

Right now, After Forever Ends is only available as an e-book. It should be out in print by late spring, maybe sooner. I am a HUGE supporter of e-book publishing. It gives the author more or less total control of their work and their destiny, which is so important to me. The downside is that anybody can do it, so there is some substandard work out there, but…you know what? Who cares! If somebody has the passion to write something

and put it out there, it has worth, so I say –go for it! E-book publishing gives authors the ability to spread their wings and fly as high as they can take themselves. I think it brings the joy, hope and the magic back to an industry that was meant to be creative and liberating, but somehow became just about making money.

Anything you’ve found to be particularly helpful in marketing your book?

TWITTER. TWITTER. And TWITTER. Haha! Twitter, to me, is the single most powerful marketing tool an author has these days. Goodreads is great, too. But the best thing anybody can do is create chatter. Get people talking about your work and the sky is the limit.

Where can readers find you?