The Villains of HIGH MAGA, by Karin Rita Gastreich 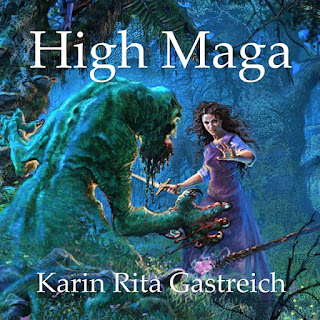 The Villains of HIGH MAGA

One of the greatest challenges of writing High Maga was crafting the villains. My first novel, Eolyn, had a formidable antagonist in the wizard Tzeremond. But the antagonists of High Maga, Queen Rishona and Prince Mechnes, raised villainy to a whole new level for me.

Rishona of the Syrnte was born under tragic circumstances. Her parents, Prince Feroden of Moisehén and his Syrnte wife, Tamara, were slaughtered while attempting to return to Feroden’s homeland, where he intended to claim the crown. Tamara was pregnant with Rishona when they were attacked, and gave birth as she died.  Gifted with the extraordinary power of Syrnte sight, Rishona remembers this moment in all its horror.  A forester rescued Rishona and returned her to the Syrnte, where she was raised by her uncle Mechnes. Rishona grew up determined to avenge the death of her parents and to claim her father’s throne in Moisehén.

The Syrnte are a sophisticated and complex culture, ruled by an extended royal family whose wealth, hunger for power, and capacity for corruption know few bounds.  While Rishona learned to thrive as part of the royal family, she also in a very deep way despises them.  In this she takes after her mother Tamara, who also longed to escape the twisted power plays and establish a new life on her own terms as Queen of Moisehén.

By the time we meet Rishona in High Maga, she has tried every avenue available to fulfill her ambitions. Every avenue, that is, except for dark magic.  Out of desperation she decides to summon ancient monsters called Naether Demons in hopes that their fury will help her defeat her cousin, King Akmael of Moisehén. Once the crown is rightfully hers, Rishona intends to send the Naether Demons back to the Underworld and establish a peaceful and just realm.

Rishona’s uncle, Mechnes, is a force of nature.  Brilliant and ruthless, a conqueror of nations, Mechnes excels in violence, manipulation, and sensual pleasures.  Like Rishona, he carries the gift of Syrnte sight; unlike her, he uses it with impunity. For Mechnes, people's hopes and dreams, their ambitions and fears, their strengths and weaknesses, are all meant to serve his own ambitions. Mechnes has no doubt that privilege should accrue to the powerful, and as a powerful man, he believes he deserves every manner of privilege within his reach.

Does Mechnes have any redeeming qualities?  I'd be better off letting you, the reader, decide. As the author, I appreciate Mechnes' fondness for music and his suck-the-marrow-dry approach to life.  He is, if nothing else, charismatic.

I tend to be a sensitive and empathetic person. Villainy does not come easily to me. One of the hardest parts of writing these villains was allowing them to do bad things to other characters. Both Rishona and Mechnes commit horrific acts that cannot be condoned in any world real or imagined. Writing these moments often made me very uncomfortable. I was also more than a little nervous about the reactions my villains would inspire when High Maga was released.

As it turns out, a handful of my readers have criticized me for the violent acts committed by Rishona and her malevolent uncle. Yet writing is as much instinct as it is craft and strategy. As the author, I knew I had to let Rishona and Mechnes be who they were meant to be, otherwise the novel would have come across as flat and dry, even unauthentic. While I would never condone or endorse acts of villainy, I will always stand by my villains. Without them, High Maga would never have become the complex and challenging journey that I intended it to be.

Sisters in magic, Eolyn and Adiana seek to revive a craft once forbidden to women. When war strikes at the heart of the kingdom, their fledgling community of magas is destroyed; its members killed, captured or scattered.

In hopes of defending her people, Eolyn tries to escape the occupied province and deliver to King Akmael a weapon that might secure their victory. Trapped by the invading army, Adiana is taken prisoner and placed at the mercy of the ruthless Prince Mechnes.

Even as their world is torn asunder, Eolyn and Adiana cling to a common dream. Courage and perseverance guide them toward a future where the Daughters of Aithne will flourish in a world set free from the violence of men.

“War propels the book forward, and the characters are at their best when the events engulfing them are at their worst.” –Publishers Weekly 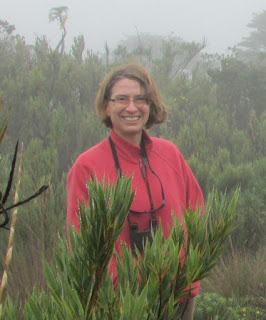 KARIN RITA GASTREICH writes tales of ordinary women and the extraordinary paths they choose. Inspired by a lifetime of exploring lush forests and breathtaking landscapes, Karin’s stories blend elements of epic fantasy, historical fiction, and romance. The worlds she creates are a strange amalgamation of medieval Europe and colonial Central America, with misty forests, vast savannas, and steamy jungles. They are populated by brave heroines, noble heroes, and twisted villains. From ancient woodlands to uncharted seas, readers will experience gripping battle scenes, heart wrenching loss, hard-won triumphs, and the ultimate magic of love. Karin’s fantasy novels Eolyn and High Maga are available from Hadley Rille Books. Her short stories have appeared in Zahir, 69 Flavors of Paranoia, and World Jumping. She runs an on-line discussion forum about women in genre fiction at Heroines of Fantasy. Follow Karin’s adventures into fantastic worlds, both real and imagined, at krgastreich.com. 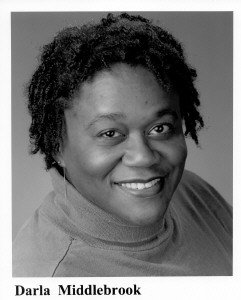 Darla’s voice is a versatile instrument used with skill. It is a voice filled with intelligence and warmth.  Her sound can range from mature to youthful female, and she can also produce convincing male timbres.  Narrative is presented in a conversational, down to earth, matter-of-fact manner and also displays a broad emotional range across a large repertoire of characters (female, male, young, old and "creature").   All of that while still conveying a sense of wonder when telling the story.

With experience of 34+ years as a Speech-Language Pathologist, more than 20 years as a stage & film actor and over 20 years as a trained singer with knowledge and insight into the mechanics of the voice and speech, Darla Middlebrook brings a wealth of experience to bear to develop character voices (male, female, mature, extremely elderly, creepy, bright exotic, etc) with an impressive emotional range.

Currently, Darla is one of many voice actors who narrate podcasts for AIRS-LA (an audio internet service for individuals with visual challenges) in addition to narrating audio books.