Campanelli: Seige of the Nighthunter by Frederick Crook


Campanelli: Siege of the Nighthunter
Hello, everyone! March 29th, 2016 saw the release of the third installment of the exciting dystopian crime thriller series, "Campanelli", by author Frederick H. Crook.


June, 2110. A serial killer strikes the populace of the City of Chicago. The first victim is a wanted man by Detective Frank Campanelli’s Sentinel Division. His body had been mutilated and, from the evidence uncovered by forensic genius, H. Lincoln Rothgery, it has been partially consumed. The unknown invader leaves a trail of corpses behind in short order, including that of a homicide detective.


To add to the mystery, the DNA evidence retrieved from a stolen vehicle indicates that the killer is former military, but special encoding prevents the murderer from being identified. Frank’s partner, Marcus Williams, seems to know more about what’s going on than he lets on, until the former Navy SEAL calls in a friend from the FBI to help.


“The Nighthunter”, as the media has labeled him, instills terror and virtually shuts down Chicago. Together, Campanelli, Williams, and the agent must work to capture the enigmatic and frighteningly efficient cannibal. 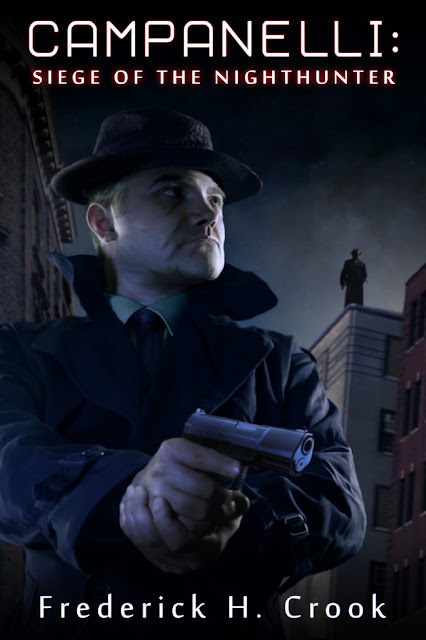 Excerpt from, “Campanelli: Siege of the Nighthunter

“Herman Werner’s and the killer’s. No ID’s been matched to his,” Rothgery stated and stood from his chair. He stepped between the two detectives and stepped casually toward the sedan. “The killer’s DNA has been engineered, as has the blood, but there’s no identification to be found in the cells. He is a he and appears to be of military origin, but it goes beyond anything I’ve ever seen.”

“So, you’re telling me that the killer is a soldier. American?” Frank asked as he stopped next to Lincoln and stared at the driver’s seat of the ruined car.

“I can’t even determine that without a serial number, Frank.”

“Soldier or not, Mister Rothgery…how the hell did he get outta that?” McLain asked from Lincoln’s other side. The big man waved his hand over the wreckage as he spoke. “That should’ve been fatal…engineered genes or not.”

“I agree.” Rothgery slid his glasses from his Roman nose and rubbed his eyes with his free hand. “Gherling is still researching the DNA and the blood while Teri is carrying out more tests.”

“You said Werner’s blood was in the car,” Frank stated.

“Yeah,” Lincoln said then nodded. “Not much of it, though. A lot of the DNA we found in it was from hairs in the carpets and seats. My opinion is that he used the car for some time. Months, perhaps close to a year.”

“So, Werner was cut out of the seatbelt…then thrown through the air.” Kirby stepped up to the side of the car and studied the sliced seatbelt. In the bright light, the precision cut was much more impressive.

“Definitely,” H. Lincoln affirmed as he replaced his eyeglasses. “And…before I forget…there are teeth marks on the body.”

“We saw those,” Frank said. He leaned back on the workbench behind him and crossed his arms. “The bites on the shoulder.”

“I’m not talking about those, Frank.”

This took Kirby’s attention from the wreck to the forensic genius. “What are you trying to say, Mister Rothgery?”

“God,” Kirby uttered and stepped away from the sedan as if it exuded heat.

“How do you come to that, Lincoln?” Frank asked.

“Pieces of both organs were left behind in the car. Nothing more than shreds, really. Seems he had to pick them out of his teeth as he drove.”

Frank lifted his right hand to his chin and rested it, keeping the left arm tucked. “You’re telling me that we have a soldier of unknown origin turned cannibal, running around the streets of Chicago.”

“From everything we’ve gathered so far, Frank, that’s about the size of it.” 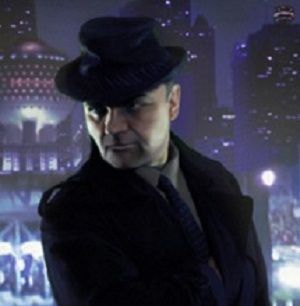 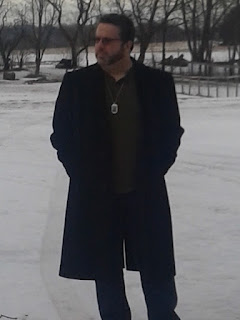 Frederick was born in Chicago in 1970 and now lives in Villa Park with his wife, Rae and their three dachshunds. He began by writing fictional works all through high school, but didn’t take himself seriously until 2009, when Frederick began writing his first novel, The Dregs of Exodus, which was self-published in late 2010. This was followed up with another novel, The Pirates of Exodus in 2012.

Throughout that year and 2013, he continued writing and published four short stories in eBook form for Kindle. Runt Pulse, The Fortress of Albion, Lunar Troll, and Campanelli: The Ping Tom Affair.

He is currently an editor for Solstice Publishing and working on novel number six, a paranormal historical fiction.