July 28, 2012
The Summer Olympics are here and as a way to celebrate, authors Courtney Vail and J.L. Campbell are hosting the Around the World Blog Hop. There are many wonderful authors, books and places to discover as well as lots o’ prizes!
There are only 16 blogs, so have fun hopping around and entering the contests on each one.
As part of the hop, I’m hosting an interview with Leslie DuBois, author of The Queen Bee of Bridgeton. 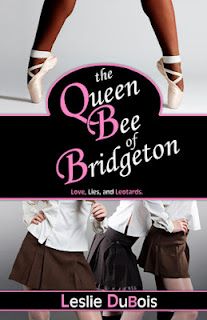 What title are you highlighting in this blog hop?

The Queen Bee of Bridgeton

When fifteen-year-old Sonya Garrison is accepted into the prestigious Bridgeton Academy, she soon discovers that rich girls are just as dangerous as the thugs in her home of Venton Heights. Maybe more so. After catching the eye of the star, white basketball player and unwittingly becoming the most popular girl in school, she earns the hatred of the three most ruthless and vindictive girls at Bridgeton. Can she defeat the reigning high school royalty? Or will they succeed in ruining her lifelong dream of becoming a world class dancer?

What gave you the idea for the book?


I confiscated a note from two of my students one day during class. The note described some lewd things that happened at a party the weekend before and how the girl was so embarrassed about it. That note became the seed for the major event in the book. I still have the note today.


Who are your main characters?


Sonya Garrison is an aspiring ballerina who is growing up in poverty. She can’t afford to attend her local ballet studio so she works out an agreement to clean the dance studio in exchange for lessons.


Will Maddox is the popular, yet troubled school basketball star who instantly falls for Sonya, but will he be good for her or her career.


Who is your favorite character and why?


Sonya is my favorite character because she reminds me a lot of myself.

Share one quirky trait of your charactersWill is obsessed with the number three. He always carries three Jolly Ranchers in his pocket.

Sonya is obsessed with the Russian Ballet.


What was your biggest challenge writing this book?

Actually, I think the hardest part was trying to keep out the profanity. I’ve been around teens for a long time and I know how they actually talk even though parents like to believe their kids do not have a potty mouth.


Spill a secret, mystery or hidden thing in your book:


The Queen Bee is not who she seems.


Where do you live?


Runaway Bay is a little known, fantastic Jamaican restaurant right by the water in Riverfront Park

What's the most well known city in your country and why?


Probably New York City. At least, it seems like the most well known city since every action movie always takes place there. Why is it aliens only want to take over New York?

What's a little known fact about where you live?

Charleston was the start of the Civil War.

Name two famous people who've been sighted in your corner of the world.


What is the one thing tourists must do?


What's your favorite restaurant and what type of food do they serve?


Wow. There are too many Amazing restaurants in Charleston to choose from. But if forced, I think I’d go with The Library at Vendue Inn. They serve Contemporary Low Country Cuisine.


What are you giving away on your blog?


Who is the author you are highlighting on your blog?


Where can readers connect with you?

around the world Leslie DuBois The Queen Bee of Bridgeton