Geoff Gander, author of The Tunnelers 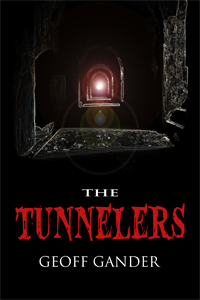 I'd like to welcome, Geoff Gander to my blog today. Take it away, Geoff...

Hello everyone, I’m delighted to be here!

First off, I’d like to thank Jeanne Bannon for being so kind as to host me on her blog (yay!)  I’m excited that my first major release is out, and I appreciate every opportunity to spread the word.  I’d like to talk a little bit about myself, before treating you to a little excerpt of The Tunnelers.
Growing up, I didn’t have any siblings, so whenever my friends weren’t available I just turned to the nearest book to entertain myself.  That wasn’t a problem, because there were books everywhere, about nearly everything.  The books that interested me most, however, were the ones about dinosaurs, the universe, and world history (especially if they had a lot of maps).  I remember staring at the pages, and imagining myself flying to other worlds and doing all sorts of fascinating things.  I guess you could say I got hooked on stories.  I still am.
I’ve always preferred fiction, and the more fantastic, the better.  Starting with Dr. Seuss, I worked my way through the Hobbit, the Lord of the Rings, the Hitch Hiker’s Guide to the Galaxy, and rounded things off in adulthood with P.G. Wodehouse and others.  But all the while, as I went deeper and deeper into the world of fiction, I composed my own stories – first in creative writing class in school, and then on my own time.  It was the most comfortable way for me to show my creative side and express my thoughts.
Writing became a fundamental part of who I am, so I suppose it was natural that I would try to “go pro”.  Thanks to the great people (editors and fellow authors) at Solstice Publishing, I’ve taken that first step, and the world is a much more exciting and interesting place because of that.
And now, without further ado, I would like you to think about something…
Conventional science would have us assume that humanity, with its cities, cars, airplanes, robots, and computers, is not only the dominant species on the planet, but the first species to build a true civilization.  We are the caretakers of the world, which will thrive or die by our actions.

But what if that assumption is wrong?
Doctor Vincent Armstrong, a clinical psychiatrist, thought science and logic explained everything.  But when a traumatized mining foreman with a case of amnesia is placed under his care, Armstrong’s comfortable assumptions are shaken.  As he works with his patient to reconstruct what happened, Armstrong makes a series of discoveries that threaten to tear apart his carefully constructed view of the world, and show in horrifying clarity that his patient is anything but delusional.
As Armstrong’s world falls apart, his recovering patient learns that he has not escaped the horrors he encountered underground, and that no place on earth is truly safe from the “Tunnelers.”

The Tunnelers, by Geoff Gander – available from Solstice Publishing!

The following document, as well as a bundle of newspaper clippings, was found among the personal effects of Dr. Vincent Armstrong, a community psychiatrist in the Evaluation Unit at the Royal Ottawa Mental Health Care Center, whose disappearance in Montreal is a matter of public record.

Although the police dismissed this package as being immaterial to their investigation, I believe that this information has a profound – almost sinister – significance when considered in relation to recent events of a more personal nature. I will let the reader decide.

My name is Vincent Armstrong. I have been practicing psychiatry at the Royal Ottawa Mental Health Care Center for twelve years; the last five of which have been with the Evaluation Unit. Over this time I have treated mental conditions that many would find horrifying, but a recent case has forced me to confront something so terrifying and so far outside my experience, that the world is now a much, much darker place for me. Other people need to know, so I have compiled my notes in a format that I hope others might find useful.

Mr. Michael Kirkwood, an employee of Argus Minerals, was referred to my care from the Ottawa General Hospital Emergency Ward as an in-patient today at 6:22 p.m., under restraint and in a state of acute agitation. The accompanying report, written by a doctor posted at the site where Mr. Kirkwood had been working and amended by the referring physician from the emergency ward, indicated only that he had witnessed a particularly horrific industrial accident, and that his resulting psychological trauma was the basis for his referral to our facility for an assessment period.

When I first saw him, Mr. Kirkwood was pleading with a nurse to be kept high above ground. He calmed down after I assured him that we would do as he asked, and I took that opportunity to administer a heavy sedative. After he was brought to his room, I examined the patient and then ordered that he be placed under close observation.

Based on that preliminary examination and a review of Mr. Kirkwood's medical records that I had requested from his employer, the patient appeared to be a healthy man in his mid-forties, with no history of mental illness or substance abuse. His previous medical exam, conducted four months earlier, showed that he was in excellent physical and mental health. With no other information available, I called Argus Minerals to request all additional information regarding the accident, as well as copies of his performance assessments, because I wished to cover all possible causes of Mr. Kirkwood's breakdown. By that time, my shift had ended, but I left instructions that I was to be contacted should his condition change.
Geoff Gander Solstice Publishing The Tunnelers