Author, J.T. Baroni helps out a great cause 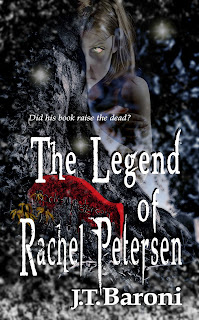 Santa Bring A Kindle? Help Sponsor A Leader Dog!
J T Baroni’s paranormal tale, The Legend of Rachel Petersen, has been released through Damnation Books, an epublisher based in . The writer plans on donating a portion of his book’s proceeds to The Leader Dogs for the Blind, located in . This organization has been training Leader Dogs and placing them with blind people, free of charge, since 1939, and they have achieved this amazing feat all from donations.
Baroni knows all too well, both their generosity and the impact of their invaluable services. Furthering that statement, he also understands first handedly how strongly the visually impaired faithfully depend, trust, and rely on their dogs, whereas his older brother, Gene, has been blind since birth and is on his third canine companion. “As kids,” Baroni fondly recalls, “My brother and I were constantly hand in hand. We went everywhere together. I was, in fact, Gene’s first Leader Dog!”
The two brothers don’t get to visit each other as often as they would like, since Gene resides three hundred miles away in . However, the times the author has visited his brother, he was impressed on how well Gene’s dog guided his blind master through the streets in The City of Brotherly Love.
Living in rural , and being an avid deer hunter, Baroni spends a great deal of time in the woods, mostly within walking distance of his home. Last year, he came upon a lone grave in the woods, which inspired his book.
Ironically, and eerily enough, Baroni’s story revolves around 39-year-old sports writer Christian Kane, who becomes outraged when The Pittsburgh Post Gazette overlooks him for a well-deserved promotion. Kane quits the Paper and moves to the country to write fiction. Inspiration flows from a grave he stumbles upon in the woods. He is then compelled to pen The Legend of Rachel Petersen, a fascinating and horrific story based on the dead twelve-year-old girl laid to rest beneath the weathered tombstone. His book quickly climbs the Best Seller lists; then makes it in to a blockbuster movie. Kane becomes rich and famous, but only to have Rachel rise from the grave, seeking revenge on him for slandering her name! Or does she?
The Legend of Rachel Petersen is available as a download at www.damnationbooks.com, or as a paperback at your favorite on-line bookstore. Here’s a quick link to the author’s page at Amazon: http://www.amazon.com/Legend-Rachel-Petersen-J-T-Baroni/dp/1615725431. However, the writer warns any potential readers, “I wrote this book with a mature audience in mind; it does contain adult content.”
The author also thanks everyone who helps support his cause, emphasizing that raising a puppy to Leader Dog status is extremely expensive, averaging forty five thousand dollars per dog.
author interview J.T. Baroni The Legend of Rachel Petersen